As the Revolution reaches its bloody height, Blanche de la Force turns her back on the world, searching for peace and purpose in the convent. But life as a Carmelite has its own horrors. Faced with an agonising choice, Blanche must let go of her fears and finally find the courage to live – or die.

Poulenc’s French Revolution-set opera was inspired by a true story.

40 individuals had their heads cut off, including 16 Carmelite nuns from Compiègne.’ This was dated 17 July 1794, from the diary of 69-year-old Célestin Guittard de Floriban (who took a particular interest in the public guillotinings) serves to remind us that Dialogues des Carmélites had at its centre a real event.

Initially, the French Revolution of 1789 was not intrinsically opposed to religion; but it was, from the start, unrelentingly harsh towards contemplative religious orders like the Carmelites. Writers in the Enlightenment had regarded such figures with something like contempt. ‘They eat, they pray, they digest’, was Voltaire’s summary. The wealth of their communities seemed a reproach when set against apostolic poverty. Indeed, religious houses formed a system of outdoor relief for supernumerary children of the upper classes.

In 1792–3, the French monarchy was overthrown, a republic founded and France drifted into war against most of Europe. The National Assembly reacted to the threat of state failure by adopting a policy of Terror. A deep abyss opened up beneath those who resisted the call of Revolutionary patriotism. The Carmelites of Compiègne were of this number. 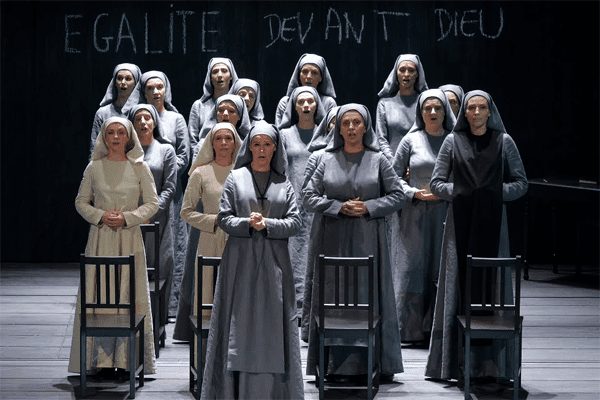