Obtaining tickets to the Sell-Out Chelsea Garden Show 2022 is hard!

Getting your hands on the coveted VIP Days also known as Members Days, or even the Public Day tickets, with access to the incredible floral displays, can be an arduous quest which we make Quick & Easy!

Ticketstosee.com, known as the web site www.ticketstosee.com is an independent ticket broker engaged in the service of finding and providing hard to get tickets & hospitality to all concerts, sporting, theatre, and cultural events world-wide to VIP clients. We are re-sellers of genuine event tickets or hospitality to events, and we do not claim title to the goods we re-sell.

We are not affiliated with, nor do we have any licenses or strategic alliances with, nor are we authorised by any official box office, promoter, venue, theatre, stadium, hotel, sporting team or sporting association. We are not the Royal Horticultural Society!

All and any copyrights, trademarks, trade names etc shown are for descriptive purposes only to identify the brand owner’s goods/services, they are both honest and referential. To explicitly clarify, we are not the owner of the brand and do not claim any association or endorsement with the owners of the brand and trademark. We are not passing off our company for any other.

We also explicitly state that we are in no way adopting any other trademark as our own brand, which is overtly promoted on this website as Ticketstosee.com with our own logo type. We act only as a re-seller of the product and make no claim to be passing off as the registered owner.

Any honest referential use of a protected brand is not being used too prominently relative to our own brand and any use categorically does not give the impression of a greater commercial connection with the protected brand than exists in reality or any misrepresentation or confusion to viewers of our site.

Our business name is Ticketstosee.com we are not associated in any way with the intellectual property holder or registered proprietor of any of the trademarks used in the description of the tickets we resell.

We explicitly state, to avoid any confusion, misrepresentation or claims of passing off that Ticketstosee.com (Our Brand Name) have absolutely no connection with The Royal Horticultural Society in connection with any of its intellectual property matters.

This notice serves as a prominent warning that is designed to minimise any confusion between two trade names or trademarks to any visitors to our website. We do not claim to be The Royal Horticultural Society who is the registered proprietor of a portfolio of trademarks regarding this event.

Honest referential use of trademarks with reference to the branded products we re-sell, is to show that your goods are compatible with them. The use is in accordance with honest practices in industrial or commercial matters.

Tickets are very difficult to come by as The Royal Horticultural Society (RHS) has to restrict the sale of tickets to the garden show due to demand outstripping supply.

Tickets are not made available to the public for the first two days of the show and you are only able to buy a few tickets per household for the rest of the garden show. The RHS on-sale dates are easily missed and Royal Chelsea tickets then sell out.

Don’t miss out we make obtaining these hard to get Flower Show tickets easy. We can provide the highly sought after All Day Entry passes for this sell-out RHS Garden Show.

What is the best day to go to the Flower Show?

On the VIP days of the Garden Show, Tuesday & Wednesday, when the venue is far less crowded. These tickets are therefore more expensive. We also supply entry for the Public days, on Thursday, Friday and Saturday, which is a lot busier.

The Chelsea Garden Show sells-out every year, secure your tickets now and avoid the disappointment of missing the World’s most popular garden show staged by The Royal Horticultural Society. Book online now or call UK 0203 070 3997 for further information.

The Queen always appears to enjoy her visit to Chelsea every year, to attend the charity gala evening on the opening Monday. Costs for entry when the Queen’s in attendance on the preview day are extremely high, but some of the proceeds go to charity. Champagne, canapes, and music await the attendees who are lucky enough to win a place at this establishment perennial networking day. Blue chip company directors, high net worth individuals all vie to attend on this very special networking day.

This event is also known as the Great Spring Show, it is held for five days in May every year by the promoters the R.H.S. Royal Horticultural Society. The show’s venue for this extravaganza of horticultural excellence is the Royal Hospital in Chelsea, London.

It’s been around a bit since 1912 to be precise at its current venue, and it gets bigger and bigger every year. The Great Spring Show, its predecessor, has been in existence since 1862 and has never missed a year since. It has metamorphosed into an event with huge appeal and interest globally.

In fact, attendees come from all over the globe to visit probably the Worlds’ greatest gardening event. This makes tickets highly sought after. The event highlights include the cutting-edge designer show gardens, Artisan and Urban Gardens with the pièce de résistance being the Floral Marquee.

Why are these tickets so expensive and hard to get?

View the breath-taking plant displays of vibrant colour and smell the floral scents, combined with a wonderful and spectacular atmosphere of excitement. It’s blooming marvellous! The Garden Show’s popularity increased throughout the second half of the century – until its popularity became its most important problem. Overcrowding within the tents became problematic during the years between the wars, but the number of show tents was increased to overcome this.

During the seventies, the attendance at the RHS Chelsea Show climbed, in 1978 by as much as 6,000 visitors in a single year. The following year, the severe crowding in the mornings at the turnstiles became so severe the turnstiles had to be closed temporarily. Emergency action was taken and the show start time was moved to 8.00am and closing time to 8.00pm.

Discounted late entry Chelsea Flower Show Tickets, you cannot see all the show in this short space of time, this measure was introduced to stagger the entry of attendees to Chelsea away from the extremely busy morning time-slot.

The show is so busy a one-way system was introduced to get through all the ticket holders visiting and a cap on the number of tickets sold introduced. But numbers of potential visitors continue to increase, and the show sells out in record time every year.

The RHS ration tickets and when they go on sale they sell out quickly it is difficult to predict when. It is best to secure your tickets early to guarantee your place at the gardening event of the year.

What times can I attend the Spring Garden Show at Chelsea?

Chelsea Flower Show Location, Where is it?

The event is held annually at The Royal Hospital Chelsea, in London. The closest tube is Sloane Square (District and Circle line). Nearest National Rail station is Victoria. There is also a shuttle bus service that will run between Victoria and Chelsea.

This is a highly popular horticultural show however on a global stage nothing beats Chelsea.

There are several places from restaurants to indoor food courts that visitors will be able to easily access whilst at the show – including the Jardin Blanc with celebrity chef Raymond Blanc and The Rock Bank Restaurant that serves up locally-sourced ingredients. Be sure to buy today to avoid disappointment. 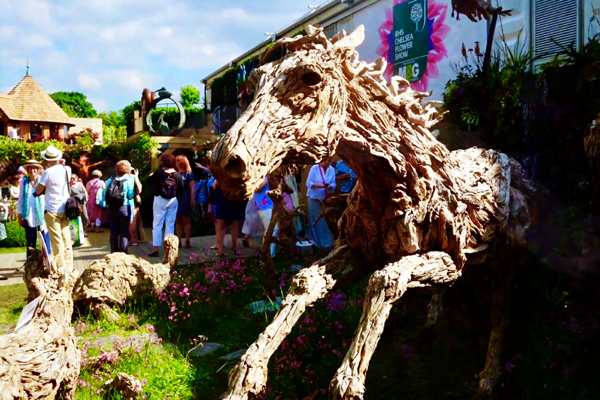