Buy hard to get Barry Manilow tickets, for his sell out concerts at The O2 London
Thursday 4 June 2020

GRAMMY®, TONY®, and EMMY® Award-winning pop superstar Barry Manilow will take to the stage at London’s O2 Arena in June 2020 for one night only. Manilow will perform his greatest hits like “Copacabana” and “Mandy” as well as songs from his new album. Ticketstosee.com is the easy way to buy hard to get Barry Manilow tickets.

Let us make your life easier, best seats at the greatest venues and occasions, we work round the clock so you don’t have to. Our promise to our customers is to always provide dependable, courteous service while never compromising integrity. Of course, along with our excellent service, we promise competitive rates.

It’s that simple! Nothing beats being there, book your Barry Manilow tickets now.

The first concert is at Birmingham’s Resorts World Arena on May 28th followed by Newcastle, Manchester, Cardiff, London, Leeds and Glasgow on June 7th.

Between 1974 and 1983 Manilow had three No. 1 singles and 25 that reached the top 40. Although not a favorite of music critics, several well-known entertainers have praised Manilow, including Sinatra, who was quoted in the 1970s saying, “He’s next.”

In 1988, Bob Dylan stopped Manilow at a party, hugged him and said, “Don’t stop what you’re doing, man. We’re all inspired by you.” As well as producing and arranging albums for other artists, including Bette Midler and Dionne Warwick, Manilow has written songs for musicals, films, and commercials. From February 2005 to December 30, 2009, he was the headliner at the Las Vegas Hilton, performing hundreds of shows before ending his relationship with the hotel. Since March 2010, he has headlined at the Paris hotel in Las Vegas. He has sold more than 80 million records worldwide. 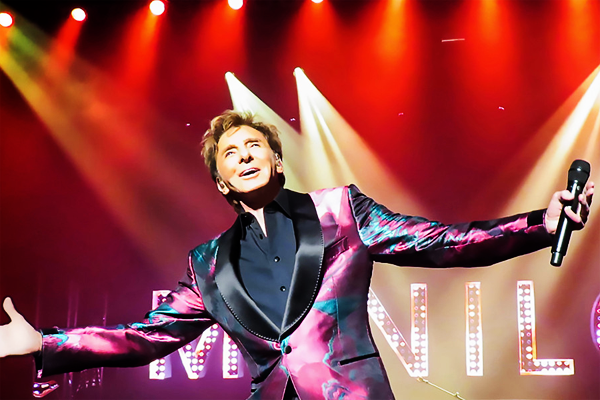