Everyone’s original favourite nanny arrives at the Banks household just in time to set things straight with wisdom, a bit of magic, and a song or two. ‘Chim Chim Cher-ee’, ‘A Spoonful of Sugar’, fan-favourite ‘Supercalifragilisticexpialidocious’, and ‘Let’s Go Fly a Kite’.

Enthral at the special effects and magic of this family sell-out show. We obtain best seated Mary Poppins Tickets and make buying these hard to get tickets easy!

Bert, a man of many trades, informs us that something big is about to happen to the Banks family. At No. 17 Cherry Tree Lane, Jane
and Michael Banks are constantly misbehaving, and Katie Nanna – the latest in a long line of nannies – has had enough (Cherry Tree Lane).

She leaves, and George Banks asks his wife, Winifred, to place an advertisement in the newspaper for a new nanny, but the children decide to write their own ad (The Perfect Nanny). Mary Poppins arrives, and she fits the children’s requirements exactly (Practically Perfect).

Mary Poppins takes the children to the park, where they meet Bert, who is creating his latest works of art. Bored with the park and wary of Bert’s scrappy appearance, the children try to escape, but Mary urges them to see the magic in everyday life. Then, the park bursts into brilliant colors and the statues come to life to dance with them (Jolly Holiday).

As Mary Poppins begins to win over the children, George informs Winifred that they must maintain order and convention. Winifred feels that she is disappointing both her husband and her children, and she struggles to understand her role within the family – and within in the world (Let’s Hope She Will Stay).

The household prepares for Winifred’s party (A Spoonful of Sugar), but even with Mary Poppins’s magic, the event is a disaster, as no one shows up. Winifred is left feeling more lost than ever.
Mary Poppins takes Jane and Michael on a trip to visit their father at his workplace, the bank (Precision and Order).

There, George has a choice: to give a loan to Herr Von Hussler, a businessman with a dubious money-making scheme, or to John Northbrook, who presents a solid plan for a factory that would help many but offers little collateral. An innocent question from Jane prompts George to remember the ideals and values he once held (A Man Has Dreams).

He decides to take a chance on Mr. Northbrook and gives him the loan.

On the way home from the bank, the children and Mary Poppins run into the Bird Woman, who is feeding the birds in front of St. Paul’s Cathedral. Jane is still worried about outward appearances and shuns her, but Michael offers to give the Bird Woman money (Feed the Birds).

Mary Poppins, Jane, Michael, and Bert
meet Mrs. Corry, the mysterious owner of the unusual “talking shop,” where people purchase words along with gingerbread. The children are surprised to hear that when their father was a boy, he came to this shop to enjoy its magic and spirit of invention (Supercalifragilisticexpialidocious).

Things begin to go very wrong for George. Von Hussler has gone to another bank for his loan and is making millions, and George is blamed for passing on the deal and is suspended without pay. In his stress, George yells at the children.

In turn, an angry Jane and Michael fight over their toys, which magically come to life to teach them a lesson (Playing the Game). Recognizing that the children are not yet ready for the lessons she has to teach them, Mary says goodbye to Bert (Chim Chim Cher-ee), leaving a note saying au revoir, or “till we meet again.”

The fall has turned to winter. The house is bustling again, because a nanny is returning to No. 17 Cherry Tree Lane. However, it’s not the much-missed Mary Poppins, but Miss Andrew, who raised George. Miss Andrew is a harsh woman who believes that children should be punished on a regular basis with a horrible- tasting medicine (Brimstone and Treacle).

In a panic, the children escape the house and run to the park where they meet Bert, who explains that the cure for every ill can be found at the end of a kite string (Let’s Go Fly a Kite). Their kite flies up into the London sky and when it comes back down, Mary Poppins is with it.

George has also been hiding from Miss Andrew (Good for Nothing). With her entire family missing, Winifred worries that she’s to blame but resolves to assert herself and fight harder for the people she loves (Being Mrs. Banks).

Mary returns home with the children and defeats Miss Andrew in an epic battle of wits and will. George returns, relieved to find that Miss Andrew has left, but still anxious about supporting his family. Winifred reminds him he can count on her and the children to stick by him.

Whisked up to the rooftops, Mary Poppins, Jane, and Michael meet Bert and his fellow chimney sweeps (Step in Time). The sweeps dance across the rooftops of London and into the Bankses’ house, wishing good luck to George and shaking his hand as they go.

The Bank Chairman asks to see George immediately. George fears the worst, but Bert reminds him that his family is more important than his ambitions (A Man Has Dreams – Reprise/A Spoonful of Sugar – Reprise).

George leaves for the bank. Winifred wishes she could go with him. Mary Poppins and the children encourage her to do what she believes is right (Anything Can Happen).

In front of the bank’s board of directors, George launches into a defense of his actions before they can tell him that he was right all along: Von Hussler’s scheme has fallen through and the competing bank that approved his loan has been ruined.

Northbrook’s business, on the other hand, is thriving and earning a healthy profit. Winifred shows up, ready to defend her husband, but when she finds the board is promoting
him, she negotiates his raise for him.

George announces that from now on his family comes first. As George and Winifred walk along the streets of London, Mary Poppins takes Jane and Michael on one more magical adventure – this time through the heavens.

Her job done, Mary Poppins says her goodbyes and flies off to her next task. Although the Banks family is sad to see her go, they are glad that they have finally found one another. 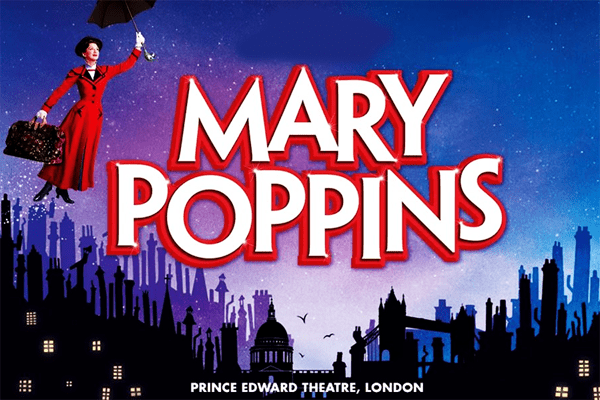 https://youtu.be/LVZUZCL3ACM?t=25
We use cookies on our website to give you the most relevant experience by remembering your preferences and repeat visits. By clicking “Accept”, you consent to the use of ALL the cookies.
Cookie settingsACCEPT
Manage consent